This past Sunday I hosted a fabulous Breakfast at Tiffany’s-themed tea party in Portland with my lovely friend, Kady. It was so fun to pay homage to Audrey Hepburn, one of my favorite style icons.

The dress code was, of course, a little black dress, and all of the ladies looked lovely. 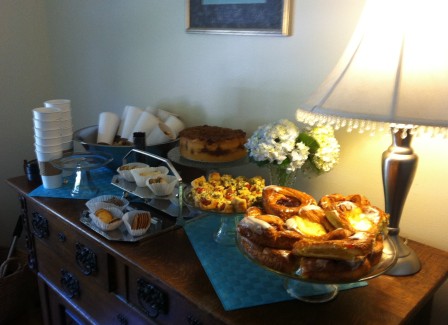 The menu was incredibly eclectic, and featured homemade crackerjacks, Brazilian banana cake (since Holly was supposed to marry a Brazilian man in the movie), 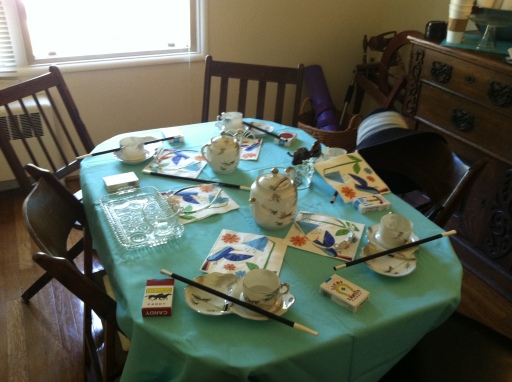 Of course, we also had tiaras and cigarette holders for everyone, which I took advantage of for some of my poses. 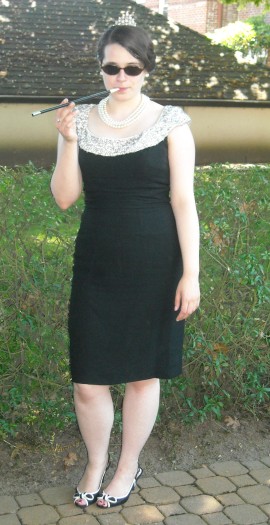 As for my dress, it’s an original LBD from the 60s, with a white yoke beaded with rhinestones and pearls that I picked it up in Seattle a couple weeks ago at Red Light Vintage.

I accessorized with pearls and other bling, of course, including a tiara that I recently bought, as well, because, let’s face it, it was the one accessory missing from my wardrobe.

As for the hairstyle, it was a total spur of the moment thing. Kady and I were frantically putting the tea together on Sunday morning and early afternoon, so I just sorta threw my hair up in a semi-60s do, using one of those bump-it hair accessories. I think I might do a hair tutorial on this one (if I can remember how I did it, of course!), as it was super-easy.

And, finally, for my special announcement – I’m moving to Portland! I just got offered a job down there and will be starting in about 2 weeks, so I’m frantically looking for a place. I love the vintage community down there, and I’m in the city like every other weekend, so it seemed as though I was slowly gravitating there anyway. Very much looking forward to having a place of my own and not having to drive 2 hours to vintage events!

Last night, I had the distinct pleasure of attending a vintage hairstyle workshop taught the lovely Kristen Behlings and hosted at AlexSandra’s Vintage Emporium in Portland. It was definitely worth the 2-hour drive from Western Washington, as Kristen really knows her stuff and just looks like she walked out of the 40s, I’m totally mesmerized by her vintage look.

The workshop was divided into two parts, the first part being curling . . . 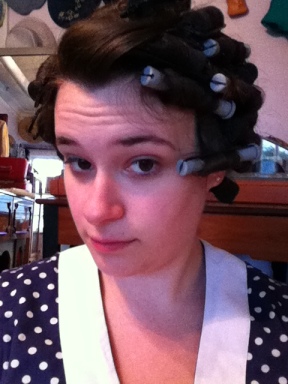 I have to say that the workshop was particularily beneficial to me in learning what *not* to do. Which seems counter-intuitive (I mean, you go to a workshop to learn what to do, and I did learn some stuff that I should be doing with my hair), but I learned some stuff I should not be doing with my hair! Kristen is a big advocate of the sponge rollers, which I used to use, but had problems with as I toss and turn a lot during the night, and wake up with bedhead. I’m definitele sold on the idea of a hooded dryer now, and luckily AlexSandra had some for sale.

I finally accomplished a Victory Roll (not without help, although my joke of the night was that I did my hair all by myself, when in reality, I probably did like one of the rolls), which I’ve never been able to do with my hair before. I *love* this look, and will definitely need to practice with my own hair some more.

I also met some more fabulous Portland vintage gals, and after we got our hair did, headed downtown to the Hotel deLuxe for cocktails!

Of course, it was too late to drive back, so I stayed with my lovely friend, Kady, and we watched Breakfast at Tiffany’s this morning, as we are hosting a Breatkfast at Tiffany’s-themed tea party next month!!!! So excited about this, as I’m a huge Audrey fangirl. Kady also has an orange kitty named Lucy that looks surprisingly like the cat in Breakfast, so of course a pic was in order. 😉 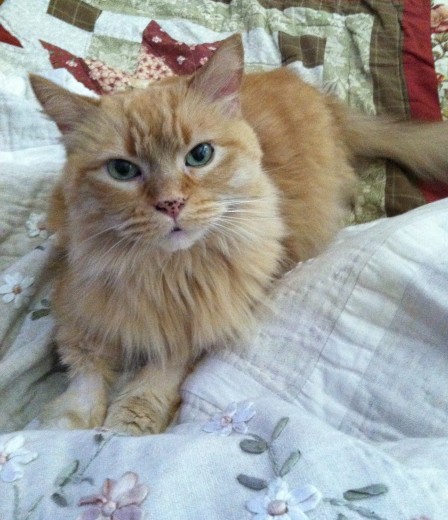 Oh! And I actually stopped by AlexSandra’s earlier that afternoon to try on a bunch of fabulous vintage clothing, as I’m going to be a model for her shop! I’m very excited about this, although I find it rather amusing that after pursuing an academic path (I got two Bachelor’s in 3 years), I’m now becoming a vintage model and singer (I also just started voice lessons). I sorta feel like a floozy Vaudeville performer, even though I’m so not . . .

Of course, I must show you my fabulous purchase of the trip, a 1950s pink Swirl wrap dress. I kept seeing it on the mannequin as I was trying things on for AlexSandra, and finally asked her to take it down to I could try it on, as it was just too cute. Readers, I had no idea what a Swirl dress was up until this point (and you may not, either, so you can read more about them here), but then I did, and I couldn’t leave it there. I paid a pretty penny for it, but it was worth it, don’t ya think? 😉